Yoga Sutra 2.2 Samādhi-bhāvanā-arthaḥ kleśa-tanū-karaṇa-arthaḥ ca
[Kriya yoga] Attainment of Samadhi or deep state meditation is the one purpose. Another purpose is to cause weakness to the impurities (kleshas)

The term meditation (from the Latin meditatio) refers to a mental practice that generally consists of paying attention to a particular object using the mind and body as well as emotions.

For example, meditating on a philosophical principle with the aim of deepening its meaning. From a spiritual point of view it can be an exercise or even a path to self-realisation and enlightenment. Meditation (bhāvanā in Sanskrit and Pali) is at the heart of many spiritual or religious practices such as those of Buddhism, Hinduism, Jainism, Sikhism, Taoism, Yoga, Islam, Christianity as well as other more recent forms of spirituality and even sectarian movements such as Transcendental Meditation.

It is a practice that can aim to produce inner peace, emptiness of mind, altered states of consciousness, gradual calming of the mind or just simple relaxation. 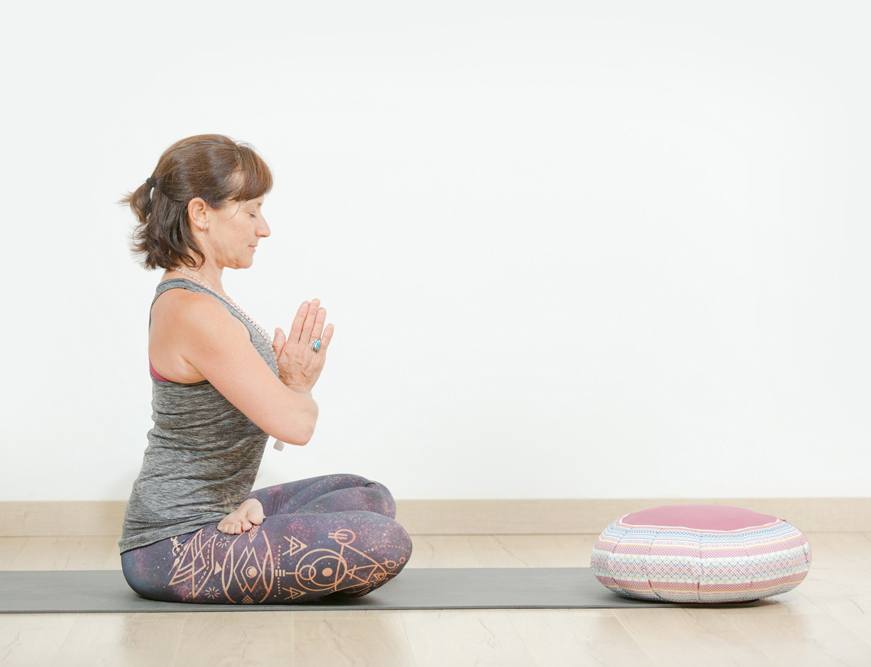 It is a practice that can aim to produce inner peace, emptiness of mind, altered states of consciousness, gradual calming of the mind or just simple relaxation. Some meditation techniques, such as mindfulness, can be used in a therapeutic setting.

Meditation techniques are very diverse. However, they can be classified according to their focus of attention: a specific body area or movement from one area to another; a specific perception; emptiness of any concept or blankness; a specific pre-selected secular or religious object; the name of a deity or peace-inspiring concept (mantra); breath; a sound; an incantation; a kōan or riddle evoking questions; a visualisation; a mental exercise.

Some meditative practices, such as yoga or tantra, can be linked to religions, whereas others are independent of any religious context, such as philosophical meditation.

Meditation can be referred to by other names, such as: relaxation; concentration; altered state of consciousness; suspension of rational and logical thought processes; maintaining self-observation.

In, what is referred to as, ‘mindfulness meditation’, the meditator rests comfortably and silently, focusing attention on an object or process thus slipping freely from one perception to another where no thoughts, images or sensations are considered as an intrusion. The meditator, with a relaxed frame of mind, is invited to explore the here and now. Using panoramic openness as an attachment, bringing the subject constantly back to the present. It avoids analysis or perceptive imagination regarding the content of consciousness, and increasing tolerance and relaxation through secondary process thinking.

There are several types of meditation in Hinduism and Indian philosophy:

In Védanta, Jñâna-Yoga has as its main method as self-inquiry (âtma vichâra), which goes back to the source of thoughts and to the transcendental reality.

In Yoga, meditation falls under the Raja Yoga, which refers to the Yoga-Sutra of Patañjali (Around the 2nd century B.C.); meditation (dhyâna) is a spiritual practice to resolve the fluctuations of the mind (vritti). The stage of deep meditation in yoga is the penultimate of the ‘eight limbs’ called ashtânga-yoga; it is placed after concentration (dhâranâ, fixation of the mind on a single point) and before contemplation (samâdhi, state of union with the personal God or absorption in the Absolute) but also through the chakras; visualisation of a form, an image; devotion to a deity (Bhakti-Yoga); production of sound by repeating a mantra (Japa yoga).

Hatha-Yoga, which is not part of the four traditional yogas, is a physical practice harmonising the Ha meaning the Sun, also known as the masculine, and the Tha, the moon or the feminine. It serves to tranquilise the physical body and thus allows easier access to the meditative state, opening up the axis of the Spirit towards matter.

Kundalinî is a visualisation technique which, since its origin, aims to bring down the spiritual energy of the Self to the root chakra (Muladhara) in order to bring it up through the energy centres.

Meditation with support. There are many proposals for meditation with support:
• observing the light of a candle and imagining it with closed eyes: this is trataka from kriya yoga;
• listening to the sound in the inner ear (nâda);
• going through the inside of the body using sensations in order to obtain a state of relaxation;
• staying in a posture with a codified hand position (mudrâ).

Unsupported meditation. for the mind to achieve calm and detachment from worldly desires and to stop wandering; this method involves being present and remaining aware and available to the spontaneous unfolding of silence.

Meditation teaches us to develop our presence and to awaken fully to our life. Meditation takes us on the path to true happiness, the path to freedom from suffering, the happiness to which all human beings aspire.
The effects of meditation are now well studied by neuroscientists: reduction of stress, better functioning of the brain, memory and mental clarity. Our whole body also receives the benefits of meditation: improved nervous system, strengthened immune system, regulated blood pressure, to name but a few.
The sessions are entirely accessible to all. All you need is the desire to come and practice.
You will be guided in the exploration of different techniques (sitting meditation in silence, guided concentrations, mantras, Yoga Nidra…). The weekly group sessions are a real support to the individual practice that you are gradually establishing. Towards inner peace… through precious space to meet with ourselves, our limits and our wisdom.